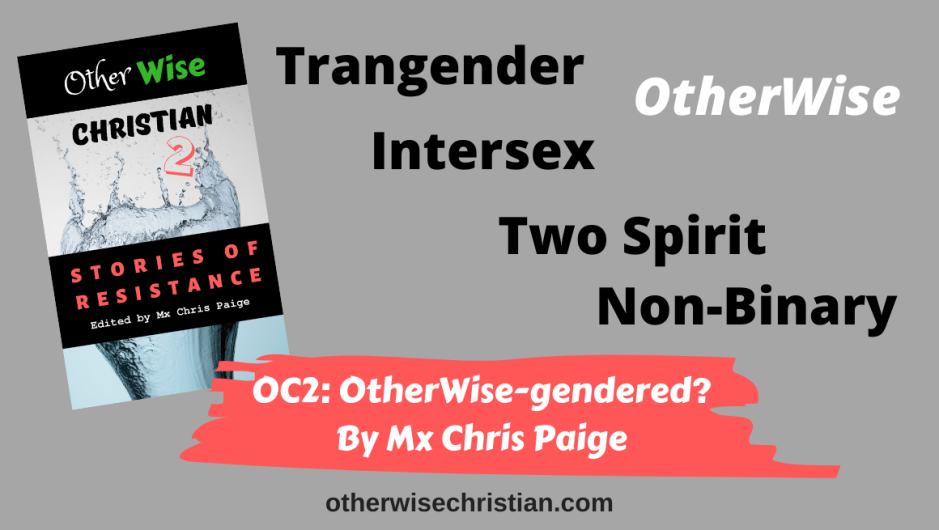 I began formally using the term “OtherWise-gendered” in OtherWise Christian: A Guidebook for Transgender Liberation (now available in hard cover!). However, framing an anthology around the term “OtherWise” is a different play. Rather than take up space up front unpacking the term, I created an Appendix that talked about it. It is excerpted here:

OtherWise Christian 2: Stories of Resistance is an anthology of reflections, which are separate enough that they could each stand alone. However, this project also builds in many ways on my first book, OtherWise Christian: A Guidebook for Transgender Liberation (2019). In particular, the idea of “OtherWise-gendered” people honors a wide variety of identities and experiences that have been suppressed or marginalized in the Western world. In chapter 2 of the first book, I explained it this way:

I will use “OtherWise-gendered” to mean “any gender identity or expression that transcends the simplistic Western settler-colonist narrative of two and only two mutually exclusive and unchangeable genders, defined strictly and easily based on biology at birth.” “OtherWise-gendered people” includes both modern “transgender” people as defined by Merriam Webster as well as some (not all!) modern intersex people. However, the definition here has to do with resisting or transcending Western settler-colonist gender ideology, rather than suggesting that transgender and intersex experience are the same. Meanwhile, “OtherWise-gendered” also stretches to embrace gender identities and expressions that are based in other cultures, worldviews, and understandings (for example, two spirit, fa’afafine, waria, muxe, hijra, etc).

When I say “OtherWise-gendered,” I am pointing to the wisdom and insight of a gender-full resistance. I am pointing to the many kinds of people whose life experiences have been trampled on or confined by Western, settler-colonist assumptions and ideology. As such, it is important to be clear that OtherWise-gendered is not a singular experience or way of being. Rather, OtherWise-gendered is an effort to open the doors and the windows to make more space for us to listen earnestly to the diversity of God’s good creation in all its many gender-full forms. (OtherWise Christian, page 8–9)

As a result, OtherWise Christian 2 includes transgender, intersex, non-binary, and two spirit representatives–gathered under this banner of “OtherWise.”

You can join in the excitement about “Stories of Resistance” by “claiming your story!” Use the #SacredOtherWise hash tags on social media: #TransAndSacred, #NonBinaryAndSacred, #IntersexAndSacred, #TwoSpiritAndSacred or your own variation.

We are also using #ClaimYourStory and #ClaimingOurStories to encourage celebration of our stories of faith and resistance.

You are especially encouraged to use these hashtags on #TransgenderDayOfVisibility / #TDOV on March 31, 2020!

9 thoughts on “OC2: What is “OtherWise-gendered”?”