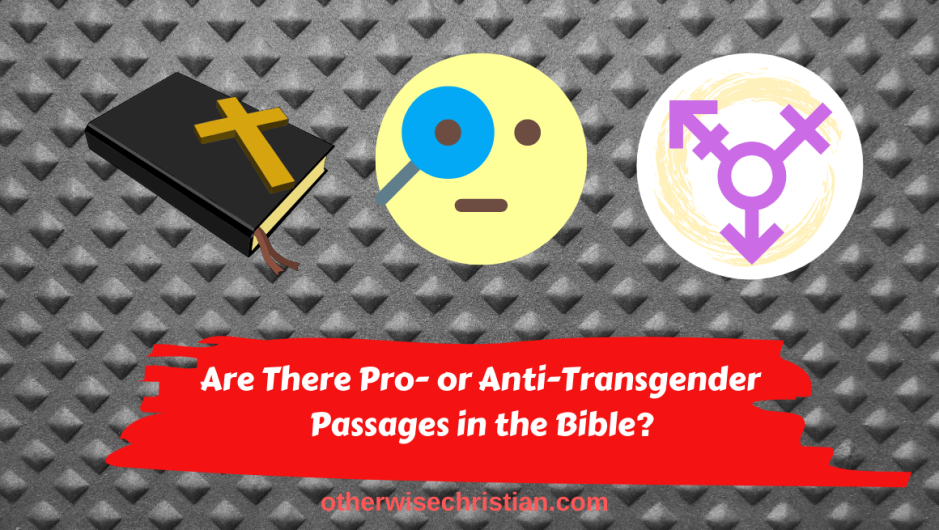 Many people will tell you there are no transgender people in the Bible. This is true only insofar as the modern word “transgender” is, well, modern. Reading the Bible is a cross-cultural, cross-epoch (time) encounter. The Bible does not talk about cell phones or email or Zoom. But there’s are lots of admonitions about how we communicate with one another. Similarly, there are lots of gender non-conforming characters in the Bible who are not, technically, “transgender.”

Obviously, there is much to be said about the teachings of Jewish and Christian tradition generally, as well as Jesus specifically that apply to transgender people. Yet, skipping ahead to “love your neighbor” is to erase the fullness of what both Jewish and Christian tradition have to say in support of gender diversity. This response mirrors much of my first book, OtherWise Christian: A Guidebook for Transgender Liberation (2020), which was, at some level, written to elaborate these themes.

While the creation stories (there are two) in Genesis 1 and 2 are often weaponized against transgender (and intersex) people, these interpretations carry lots of eisigetical baggage. In other words, people happily read Karl Barth’s cishet-centered approach (writing from 1919 C.E. to 1967 C.E.) back into texts that are thousands of years old. The idea that God intended for all of creation to carefully align with two complimentary, mutually exclusive, unchanging genders (male and female) is simply not supported by the text itself (which talks about relationship as the cause of that sacred Divine Surgery, not gender), the Hebrew, the Rabbinic tradition as a whole, or anything we know about anthropological constructions in antiquity.

Indeed, the creation stories are often read as affirming of gender diversity. In particular, recognizing that the first earth creature, made in the image of God, emerged prior to gender and in some way reflected the pronoun “them.”

While nearly anything in the Bible can be weaponized, there are two verses in Deuteronomy which are especially easy to read as weapons against gender non-conforming people. Deuteronomy 22:5 seems to speak about cross-dressing. Deuteronomy 23:1 seems to marginalize certain physical, genital attributes. The problem is that this kind of interpretation requires a single-mindedness about assaulting gender non-conforming people that is not sustained by the rest of either Jewish or Christian tradition.

See also: TransTexts – Cross-Dressing and Drag (free on the web)

The Arc around Eunuchs

A literal reading of Deuteronomy 23:1 is regularly used to condemn genital surgery, even though Jewish tradition has genital surgery (circumcision) as a prominent rite of passage. Isaiah 56 makes an everlasting promise to eunuchs which is typically ignored by those who are content with condemning trans folk. The kind of anti-trans literalism used to make Deuteronomy a weapon somehow does not carry over into red-letter Jesus speaking about eunuchs as manifestations of God’s work in the world (Matthew 19:11-12). Finally, the first not-Jewish baptism happens to an Ethiopian eunuch in Acts 8. In other words, to read the Christian Bible as anti-trans using Deuteronomy, you have to ignore the liberatory messages of Isaiah, Matthew, and Acts which wholly embrace eunuchs.

This is not just a theoretical question. The Ethiopian eunuch in Acts 8 is far from the only eunuch we meet in scripture. In fact there are lots of people explicitly called eunuchs throughout scripture (the words appears 50 times in the Christian Bible). Plus many more who were probably eunuchs based on what we know about their life experiences and historical context.

Gender in Jewish and Christian Tradition

Beyond the often misinterpreted theme around eunuchs, there is lots more to be said about how gender is used, interrogated, and reimagined in both Jewish and Christian tradition. The idea of gender as a static category that was imposed “from the beginning” without adjustment or transcendence is simply not accurate to the text or tradition.

Joy Ladin is a particularly notable voice for reading gender transcendence in Jewish tradition. In Christian tradition, both Jesus and Paul made a variety of moves that challenge the idea of gender as a category that cannot be transcended. Favorite not-necessarily-eunuch gender benders include: Rebekah, Joseph, Mary and Martha, Jesus, and the “man carrying a jug of water.”

See also: Joy Ladin’s Soul of the Stranger: Reading God and Torah from a Transgender Perspective (free blog entry about the book).

It’s frustrating that people are still saying we did not exist in antiquity. No. Modern gender-affirming surgeries as we understand them today did not exist, but neither did essentialist ideas about binary gender or complimentarianism. Ancient anthropologies (ideas about humanity) assumed humans could change form, even gender. Indeed, genital surgery was common place for a variety of reasons. Jewish and Christian traditions clearly include knowledge of such possibilities.

Understanding what parts of the Bible are relevant to modern conversations about gender diversity means reading across several thousand years to other cultures on another continent(s). Yet, when we look across, we find a diverse array of gender non-conforming people being used by God to further God’s plans for the world.

See also: Transgender and the (Christian) Bible (free blog entry) for a list of related resources if you want to do a deeper dive.