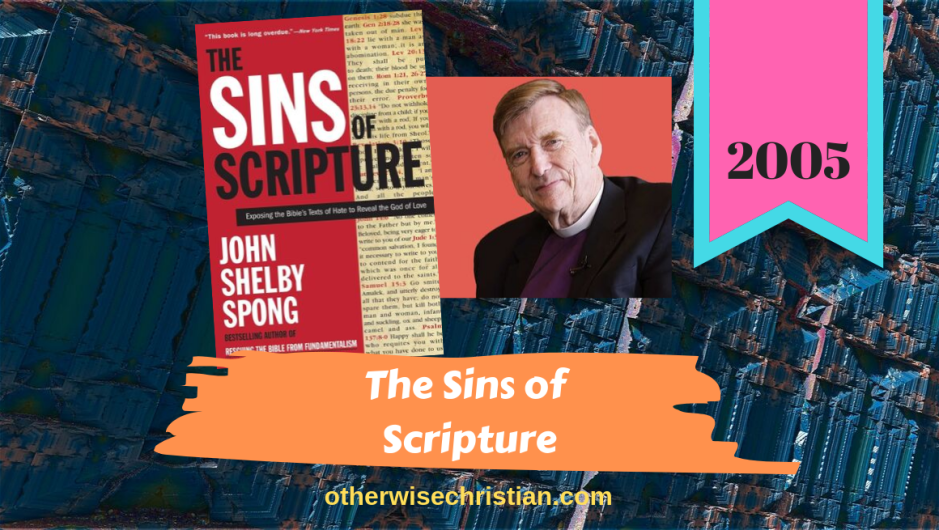 Bishop John Spong is a well-known representative voice for Christian liberalism. In The Sins of Scripture: Exposing the Bible’s Texts of Hate to Reveal the God of Love, he provides an encyclopedic review of problematic ways the Christian Bible has been used as a weapon on a variety of “issues.”

I included The Sins of Scripture in Appendix B of OtherWise Christian: A Guidebook for Transgender Liberation. If you are someone who is unsure why people have hard feelings about the Bible, then this is a pretty good primer.

Spong reviews the ways the Bible has been used to defend overpopulation, sexism, homophobia, violence against women and children, anti-Semitism, and more. Honestly, I found it a bit tedious. I literally got library fines because I just kept avoiding going back to it. Not that it’s poorly written. There has just been so much misuse that it’s depressing.

Published in 2005 (during the “transgender spring“), it does however fail to touch on OtherWise-gendered folk in any way. Perhaps we should call Bishop Spong a product of his time. Not a great excuse, but most people were still barely even seeing us.

More egregious to my eye is his failure to give more than one long paragraph of attention to U.S. chattle slavery, in a chapter about violence. In my opinion, the complicity of white Christianity with white supremacy deserves more attention in a review of the Bible that covers so much ground. Likewise, I saw no consideration whatsoever in the genocide of Native Americans. Native American (nor indigenous) spirituality isn’t even mentioned in the section on interfaith concerns. In fact, he doesn’t appear to touch on the use of the Bible to support war and militarism at all.

Spong’s approach is to dismiss a variety of things as out-dated. He talks about the Judeo-Christian tradition, which my Jewish friends and colleagues find cringe-worthy since the traditions are related but distinct. Sometimes, he seems to invoke self-evident logic… like “nobody in the 21st century believes that anymore.” For example, “Of course, stories of cosmic ascensions are mythological.” (page 282). I will just say that dismissing sacred text isn’t my favorite approach to a tradition that has sustained so many for so long.

He does survey Christian anti-Semitism, bit by bit, all the way back to the influence of Marcion (140 CE) and then takes on the Christian Greek Testament itself, arguing that Judas may not have been a historical figure, but rather an invented device to help shape the story around the role of the Jewish religious authorities. Spong ultimately says that the context was the destruction of the Jewish Temple in 70 CE and the Christians all of a sudden wanting to avoid being associated with Jewish traditions out of a self-interested preservation instinct.

Theologically, Spong critiques God as a punishing parental figure. He takes on certainty acknowledging the significance of the turn toward Christian empire/Christendom in the fourth century CE and pushes on to the singularity of Christ as a problem.

His chapter on interfaith dialogue strikes me as well-meaning, but inexperienced–especially with a continuing emphasis on God-language, which does not work in many traditions!

…the change cannot be simply cosmetic, an adjustment around the edges of our faith story. It has to be so total and so radical that many will think such a change is either impossible or will result inhe death of the patient. (Spong, page 178)

At the end, Spong tries to tell the story of the “Jewish Epic” and then fits Jesus into that frame. I do think placing Jesus in his Jewish context is imporant, but by that point in the book, I no longer trusted Spong to be the Christian or interfaith resource that I would turn to for such a task.

Having said all of that, I won’t be taking The Sins of Scripture off of my list. I think there are problematic aspects of it, but I do think it serves a purpose in terms of shedding light on some of the basic problems with how the Christian Bible and Christian tradition have been used.

In the end, Spong’s modernist, liberal approach fails to convince me that the tradition is worth keeping at all. I think he’s trying to construct an intellectual case for the tradition and in the process, I think he fails to articulate what is left that is actually worth saving. Inspired by Rachel Held Evans is a great resource for what Spong is lacking in terms of finding beauty and mystery in the tradition. There other books (which I’ll review eventually) that seem more trustworthy to me in terms of putting Jesus in a Jewish context or dealing with dynamics of colonization (esp around race and culture) or of course dealing with gender diversity broadly cast (may I recommend OtherWise Christian?!).

Now to go return the book and pay my fines.