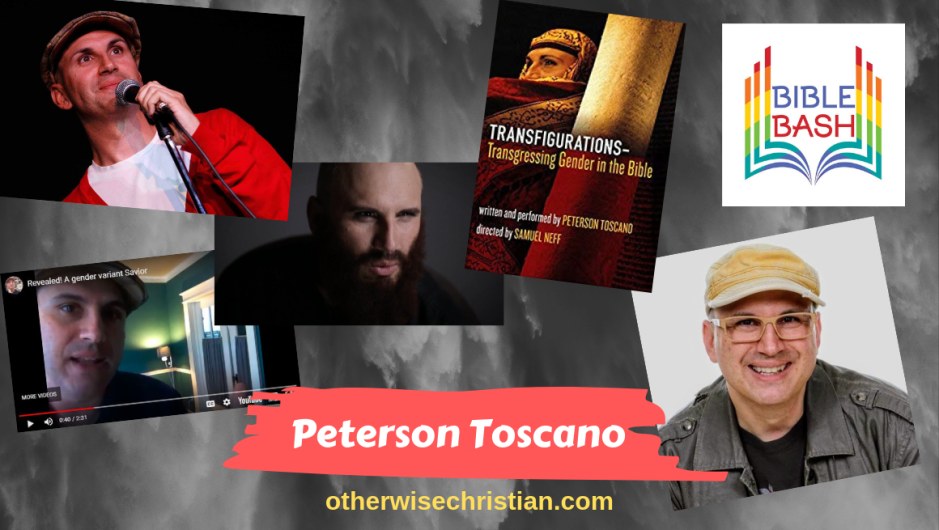 One day, a long time ago, some guy named Peterson invited me out to have coffee in Philadelphia and to discuss his play about transgender Bible characters. Honestly, I was really skeptical. However, Peterson had done his homework, not only in terms of the Bible, but by talking extensively with people of transgender experience to really develop some awareness and cultural competence of our lived experience.

Peterson agreed to show Transfigurations: Transgressing Gender in the Bible at the Philadelphia Trans Health Conference in 2009. He waived his fee because he knew the audience would be primarily transgender folk. So many “allies” to transgender people are eager to make a buck off of us, but Peterson has time and again showed his commitment to supporting the community in tangible ways. As he retired Transfigurations, he compiled a list of transgender Bible scholars so he could recommend alternatives when people approached him about his work.

In his work on gender and the Bible, Peterson has also brought additional visibility to Ebed-melech, the “other” Ethiopian eunuch. The Bible Bash (with Liam Hooper) podcast is also putting out great material, for instance on Ashpenaz and Daniel.

Peterson launched into the public eye with his one-man show about ex-gay ministries, Doing Time in the Homo No Mo’ Halfway House, which can still be downloaded from his website. Peterson became a prominent ex-ex-gay advocate and was a key player in developing community behind Beyond Ex-Gay.

As he was closing out Transfigurations, Peterson began work on climate change as a queer issue, which continues to be one of his passions today. You can follow his Climate Stew podcast if you want to focus on this area of his work.

Peterson really is a delightful human-being. My child visited the Philadelphia Trans Health Conference one Saturday and Peterson took the time to play with her for a few minutes. She was so charmed that she hasn’t stopped talking about him ever since. If you ever have a chance to book Peterson Toscano for anything, I encourage you to go for it (also ask him to do the “spider” trick and tell him Nevaeh sent you!).